What Canadian Snowbirds Need to Know About IRS Form 8840

Veronika Chang is a Toronto based tax lawyer at Morris Kepes Winters LLP. With over ten years of experience, Veronika's practice focuses on Canada - U.S. cross border tax matters, trusts and estate planning. She is licensed to practice in both Canada and the U.S. 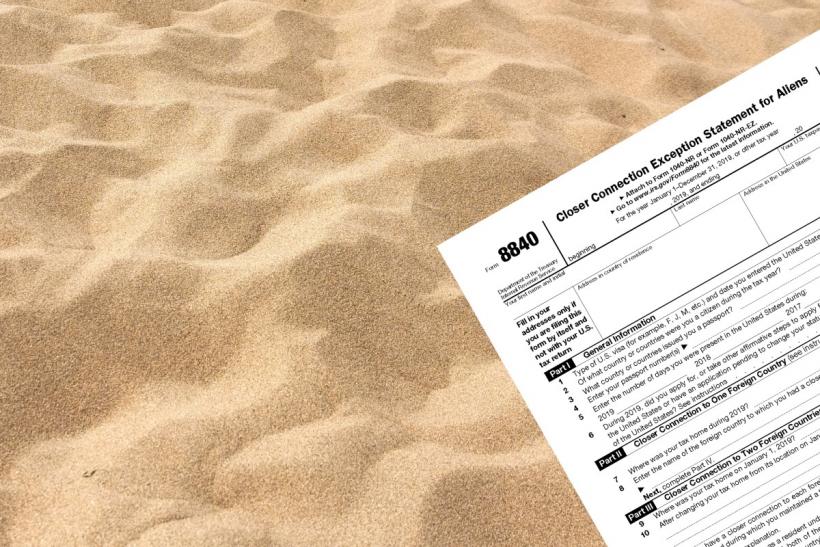 Every winter, hundreds of thousands of Canadians migrate to the southern United States in search of warmer weather.

And while most Canadian snowbirds are lucky to be able to cross the U.S. border physically without much hassle, some may find themselves not so lucky when it comes to crossing the U.S. tax border.

This is because Canadians who spend a significant amount of time in the U.S. risk being taxed as U.S. residents, so you’ll want to make sure you understand and follow the rules, as well as take appropriate steps to avoid finding yourself in this situation.

And remember, the rules for determining who is a U.S. resident are different for U.S. immigration and U.S. tax purposes.

As far as U.S. tax rules are concerned, you don’t need to be a U.S. citizen or green card holder to be subject to the U.S. tax regime.

Under U.S. tax rules, a “U.S. person” is subject to U.S. tax on his or her worldwide income.

A “U.S. person” is defined as a U.S. citizen or U.S. resident, and a “U.S. resident” includes anyone who holds a green card or meets the Substantial Presence Test.

What is the Substantial Presence Test?

The Substantial Presence Test is where many Canadian snowbirds can run into trouble. It’s a formula that determines if you are considered a U.S. resident for tax purposes based on the number of days you spend in the U.S. over a rolling three-year period.

If you “meet” the Substantial Presence Test, you could very well be subject to the U.S. tax regime.

You would meet the Substantial Presence Test if:

Using this formula, Canadian snowbirds spending 122 days or more each calendar year in the U.S. could well be considered a U.S. tax resident.

You can use the U.S. Residency Calculator to help you estimate how many days you can spend in the U.S. before being considered a U.S. resident for tax purposes under the Substantial Presence Test.

So should Canadian snowbirds make their way back up to the cold north before they reach 122 days in a calendar year? Not necessarily.

Those wishing to stay a bit longer can do so safely, spending up to 182 days per calendar year without being considered a U.S. tax resident. However, it does require a bit of paperwork. Here’s how it works.

Exception to the Substantial Presence Test

U.S. tax law provides for an exception where an individual:

Determining one’s “tax home” also comes with a set of factors, but generally an individual’s tax home is the place where he or she makes a living, or if the individual is retired, then it would be his or her regular place of abode in a real and substantial sense.

Canadian snowbirds staying in the U.S. for less than 183 days should be able to claim this exception and avoid being taxed as a U.S. tax resident on their worldwide income by filing Form 8840 with the IRS. U.S. citizens (including dual citizens) and green card holders cannot take advantage of this exception.

In order to claim the benefits of this exception, you must provide the IRS with detailed information about your personal situation. This is done by filing an IRS Form 8840, Closer Connection Exception Statement for Aliens.

Although the information can be furnished to the IRS in a written statement rather than on a Form 8840, it is recommended that you use the Form 8840 to make sure that all requisite information is included.

What Information Is Needed on Form 8840?

Form 8840 is fairly straight forward and not particularly complicated.

In addition to personal identifying information, you will need to answer a series of questions to prove that you had significant contacts with a foreign country or countries. For example, it asks you about the whereabouts of your permanent home, family, care, and personal property. It also asks whether you had any U.S. source income during the year. If the answer is yes, then you may also be required to file Form 1040NR, U.S. Nonresident Alien Income Tax Return.

Although it appears to be a simple form, it would be prudent to have a tax professional review it, as one wrong answer can determine whether you are a U.S. tax resident or not.

Canadian snowbirds and those who spend a fair amount of time in the U.S. should assess whether they should be filing Form 8840.

Even those who spend less than 122 days in a given year should consider filing Form 8840 as a safeguard measure. Since the Substantial Presence Test takes into account the number of days in the U.S. over 3 years, it is possible to meet the test and be considered a U.S. tax resident even if you spend less than 122 days in a particular year. Consider the following situation as an example:

Form 8840 should be filed by June 15th of the following year and it should be filed on an annual basis. If the Form 8840, or an equivalent statement, is not filed with the IRS on a timely basis, you will be denied the right to claim the closer connection exception and may be classified as a U.S. tax resident for the year.

Unlike the CRA, the IRS does not send a “receipt” similar to a Notice of Assessment to acknowledge that it has received the Form 8840. Therefore, it is recommended that you keep a copy of the Form 8840, along with the proof of mailing.